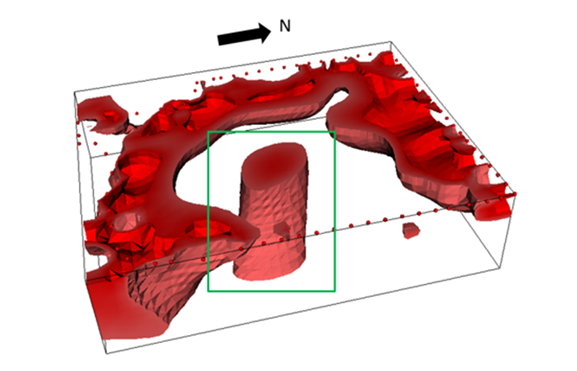 We recently deployed a technique known as Electrical Resistivity Tomography (ERT) at the car park of a large UK organisation where subsidence was suspected.

ERT involves injecting a current into the ground via a pair of electrodes, and the resulting potential field is measured by a corresponding pair of potential electrodes.  The field set-up involves deploying an array of regularly spaced electrodes connected to a central control unit.  Resistivity data is recorded via combinations of current and potential electrode pair to build up a cross section of apparent resistivity beneath the surface.  It is also possible to create 3D models deploying the electrodes around the area of investigation.

We were approached to ascertain why the car park was showing significant surface subsidence so that they could understand whether the area was safe and posed no threat for users.  The local geology is known to consist of clay over laying chalk.  Chalk can be prone to dissolution which can lead to cavities that in extreme cases can develop into sink holes.

An initial survey using Array Ground Probing Radar revealed inconsistencies within the subsurface construction showing what appeared to be areas of inconsistent material however the data was only able to penetrate to depths of between 1m and 1.5m and it was clear the issues were arising further below.

A ring of electrodes were then placed in a strategically designed pattern around the car park and approximately 3,800 recordings taken between them.  The readings collected were cross referenced and the data reduced to 2,500 measurements with these used to build an image of the subsurface.  On modelling these results the issue became apparent.

The image below shows the 3D data set with the purple area distinctively revealing a low resistivity anomaly: 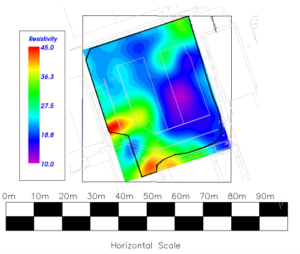 Based on the data recorded it could be deduced that the area appeared to be filled with poorly compressed material which was channelling and holding water.  This means it could potentially be a  shaft that has been backfilled with unsuitable material and not compacted properly. 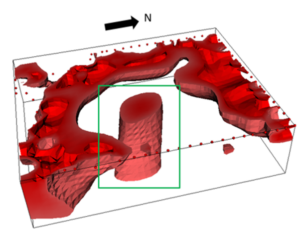 The next stage involved conducting bore hole samples and excavating trenches to confirm the findings of the ERT survey and test the load bearing capacities of the material present within the anomaly area.  This confirmed that this feature was indeed filled with poorly compacted “spoil” and that it was almost certainly the cause of the issues observed on the surface.

The data gathered has formed the basis of a remedial strategy being designed to address the issue and render the car park safe for the future.

The Benefits of Deploying ERT

ERT brings a wealth of important benefits to projects.  It produces highly informative results at greater depths than most existing technologies can.  This technique is relatively straight forward to deploy and the results generated will inform designs, reduce concerns and risks associated with deeper buried objects.  It is especially effective at finding deeper voids, sewer lines and buried structures, as well as providing a characterisation of the subsurface make up.

This is just one of the techniques that Macleod Simmonds employ to help our clients understand the hidden environment.   The team is dedicated to finding the right reporting solution to a given issue or application, with the huge range of technologies at our disposal, it is rare that we cannot find an answer to help solve those otherwise difficult to understand issues face in the world of civil engineering.   If you have an issue and want the UK’s leading solution provider to investigate, please contact the team.