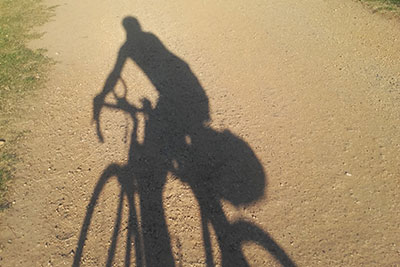 Lukasz Olejniczak, a Senior Geophysicist in the Macleod Simmonds team, has returned unscathed from the Transcontinental Bike Race this summer. This week we caught up with Lukasz to find out how it all went.

The Transcontinental Bike Race is one of the toughest bike races in Europe. Covering approximately 3000 miles, with tough to reach control points scattered at various parts of the race, only 40-50% of entrants successfully complete the race. Lukasz started his journey in Belgium, just outside Brussels, and the finish line was all the way on the other side of Europe in Greece.

As an unsupported race, there are several rules for the Transcontinental Bike Race. One of the most challenging of these is the rule that participants are not allowed to receive any outside help from anybody after the race starts. This includes asking fellow cyclists for water. Lukasz would start each day unsure of where he would be sleeping that evening. ‘This is the toughest race in Europe,’ said Lukasz.

About half way through the race, disaster struck and Lukasz was forced to abandon the race. ‘In the middle of the night during the race, on a busy road in the Czech Republic, an incident with a lorry left me in the ditch! My bike was ruined. The front wheel and the fork were completely busted.’

Sitting in a ditch 150km from the Polish border in the middle of the night Lukasz was grateful that he was unscathed. Unable to get the parts for his bike delivered in time to arrive at the next check point, he had no choice but to withdraw from the race. Running through his mind were his three children, and how grateful he was that he would return home to see them again. ‘I’ve climbed mountains and paraglided for most of my life,’ said Lukasz. ‘These activities are adventurous. What I did on the Transcontinental Race is very close to crossing the line from adventurous to something simply very dangerous. I cycled 300-350km per day on very busy roads and slept only 5 hours every other night.’

Lukasz is not someone who likes to leave a challenge uncompleted, he says he is determined to return to Brussels in 2020 and complete the race. ‘I can’t wait to be back and finish what I started. I remember the 4am sunrise on a mountaintop in Slovenia. I remember the feeling of adrenaline pumping through my body as I cycled across Europe.’

We are very pleased to have him back and look forward to supporting him in the next challenge.